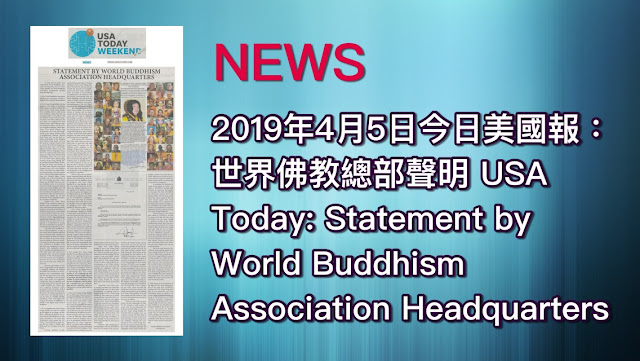 1.  We at World Buddhism Association Headquarters will assume all legal liability for the veracity of this statement.

2.         H. H. Dorje Chang Buddha III is the supreme world leader of Buddhism. Such a status is not self-investiture! The status of H.H. Dorje Chang Buddha III as a Buddha did not result merely from Buddhists calling Him that out of respect. Rather, in accordance with the Buddhist system of status-recognition that is more than 1,000 years old, such status was recognized by those Dharma kings, regent Dharma kings, and eminent monastics who have status-recognition authority within Buddhism. They include Dharma King Dodrupchen, who is the sole lineage-holder of the highest Rainbow-Body Accomplishment Dharma; Dharma King Penor, who was the third supreme world-leader of the Nyingma sect; Dharma King Achuk, who was the foremost monastic of great virtue in modern Tibet; Dharma King Gongbao Dumu Quji, who is the Yidam-Dharma Initiation Master of the 17th Karmapa; Dharma King Jigme Dorje, who is the supreme world-leader of the Jonang sect; Sleep Yoga Dharma King Mindrolling Trichen, who was a master of the Dalai Lama; Dharma King Trulshik, Dharma King Taklung Tsetul, and Dharma King Chogye Trichen, all three of whom were masters of the Dalai Lama; Dharma King Jigdal Dagchen Sakya, who is the supreme leader of the Sakya sect; Regent Dharma King Shamarpa, who was a master of the 17th Karmapa; Regent Dharma King and National Master Goshir Gyaltsab, who is the Sutra-Master of the 17th Karmapa; and others. These leaders are all publicly known in current Buddhist circles to be first-rate eminent monastics and people of great virtue from various Buddhist sects. All of them have individually issued an official document of recognition or corroboration to affirm the status of H.H. Dorje Chang Buddha III. All such documents carry recognition authority according to Buddhism.

According to the Buddhist system of status-recognition, as long as two people with recognition authority who are Dharma kings, rinpoches, or lamas recognize the status of someone, then the status of the person recognized is established. However, as history evolved, the statuses of many people were established in Buddhist circles after they were recognized by just one rinpoche with recognition authority. For example, the popularly known 14th Dalai Lama only received one recognition from one person, Reting Rinpoche V. The 17th Karmapa likewise only received two recognitions. Moreover, the one or two recognitions they received came from within their own sects.

However, with respect to H.H. Dorje Chang Buddha III, the situation is completely different. His Holiness the Buddha has received over 100 recognitions and corroborations, making Him the first person in the entire history of Buddhism to have received such a large number of recognitions. Furthermore, those recognitions and corroborations did not come from just a single Buddhist sect. Rather, they were recognition documents written and issued by the top leaders of all of Buddhism and each of the major Buddhist sects. The status recognized was not the status of a rinpoche; rather, it was the status of a Buddha (Buddha Vajradhara), which is the highest holy being in the entirety of Buddhism. A Buddha is the highest leader of all of Buddhism.

Perusing historical records, one finds that in the history of human civilization, H.H. Dorje Chang Buddha III has been the only one who has reached the pinnacle of accomplishment in the Five Vidyas, whether in terms of worldly or transcendental accomplishments. His Holiness is the pre-eminent, tremendously holy one within Buddhism who truly meets the criteria of “perfect mastery of exoteric and esoteric Buddhism, and perfect accomplishments in the Five Vidyas” as prescribed by Shakyamuni Buddha!

The accomplishments of H.H. Dorje Chang Buddha III are too numerous to mention and too exceptional to describe. From poetry, iambic verses, odes and songs, to calligraphy and writing, to medicine and healing, to paintings and sculptures, to science, technology, and craftsmanship, to the teachings and principles of the Buddhist scriptures, to the absolute truth of the Dharma, and to the intrinsic reality of all phenomena, His Holiness has unimpeded proficiency and wondrous excellence in all of these fields without exception. No other person in history can be found who is comparable.

With respect to the Craftsmanship Vidya alone, there has been for many years an open offer with huge reward money for anyone who can duplicate certain sculptures or the painting “Dragon-Carp Playing in a Lotus Pond,” all of which were created by H.H. Dorje Chang Buddha III. The reward is still being offered to this day, but no one has yet been able to reproduce such artworks through their own sculpting knife or painting brush! If you cannot duplicate it, you can ask someone else to attempt a successful duplication. If anyone is successful, we will admit right away that these were not the products of the enlightenment and wisdom of a Buddha!

Based on the real accomplishments mentioned above and the recognition and corroboration certificates that accord with the Buddhist system of recognition, H.H. Dorje Chang Buddha III is a true Buddha. A Buddha is the original entity that all Buddhists take refuge in and learn from. The appellation of “Buddha” indicates one with the greatest and highest state of enlightenment in all of Buddhism. No patriarch or Dharma king within any sect of Buddhism is qualified to have a status above that of a Buddha! At present, in this world, there is only one Buddha who is the highest leader of Buddhism—H.H. Dorje Chang Buddha III. There is no other!

H.H. Dorje Chang Buddha III is inherently a Buddha. A Buddha is relied upon by all Buddhists as the one from whom they learn and receive teachings. Not only is His Holiness the Buddha the model that we at World Buddhism Association Headquarters follow and learn from, numerous other Buddhist organizations also rely on, follow, and learn from Him. Buddhists learn from the words of as well as the personal example set by His Holiness the Buddha. They have set up Dharma-listening centers to listen to and learn from the audio-recorded Dharma imparted by His Holiness the Buddha. Furthermore, H.H. Dorje Chang Buddha III is the only tremendously holy being in the history of Buddhism who does not accept any offerings but simply serves all people voluntarily.

4.         Even though H.H. Dorje Chang Buddha III is an authentic Buddha, His point of view regarding His status has remained consistent. His Holiness the Buddha clearly expressed His attitude through His words that were published alongside the two contrasting photos showing the reversal of His appearance from old age to youthfulness. Which of those words carry the slightest element of self-boasting? H.H. Dorje Chang Buddha III said, “Although the title of Buddha has been legally affirmed in my name, the name Dorje Chang Buddha III means nothing to me. I am not a Bodhisattva, not an Arhat, not a venerable one, not a Dharma king, and not a rinpoche. I am not a holy person. I am one with a heart of humility.”

6.         With respect to the recognitions of the status of H.H. Dorje Chang Buddha III, the letter from INTERPOL, evidence that H.H. Dorje Chang Buddha III was persecuted, and other information, please go online to the website https://ibsahq.org/buddha-en. Just as we did in the past, we at World Buddhism Association Headquarters will take the teachings of H.H. Dorje Chang Buddha III and Namo Shakyamuni Buddha as our foundation and will guide Buddhists all over the world to learn and practice the Buddha Dharma so that they will become good people who are unselfish, benevolent, and law-abiding, who contribute to society and have happy family lives, who eventually realize the true suchness of Dharma-nature, and who attain liberation. 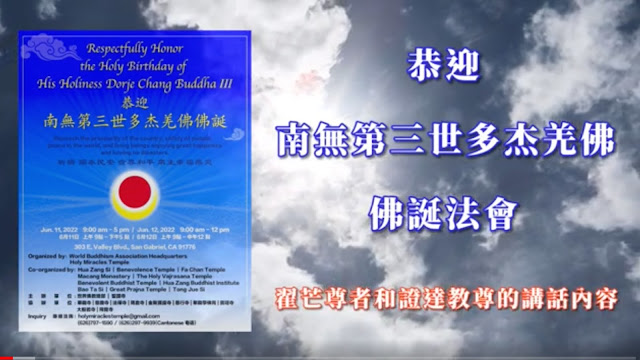 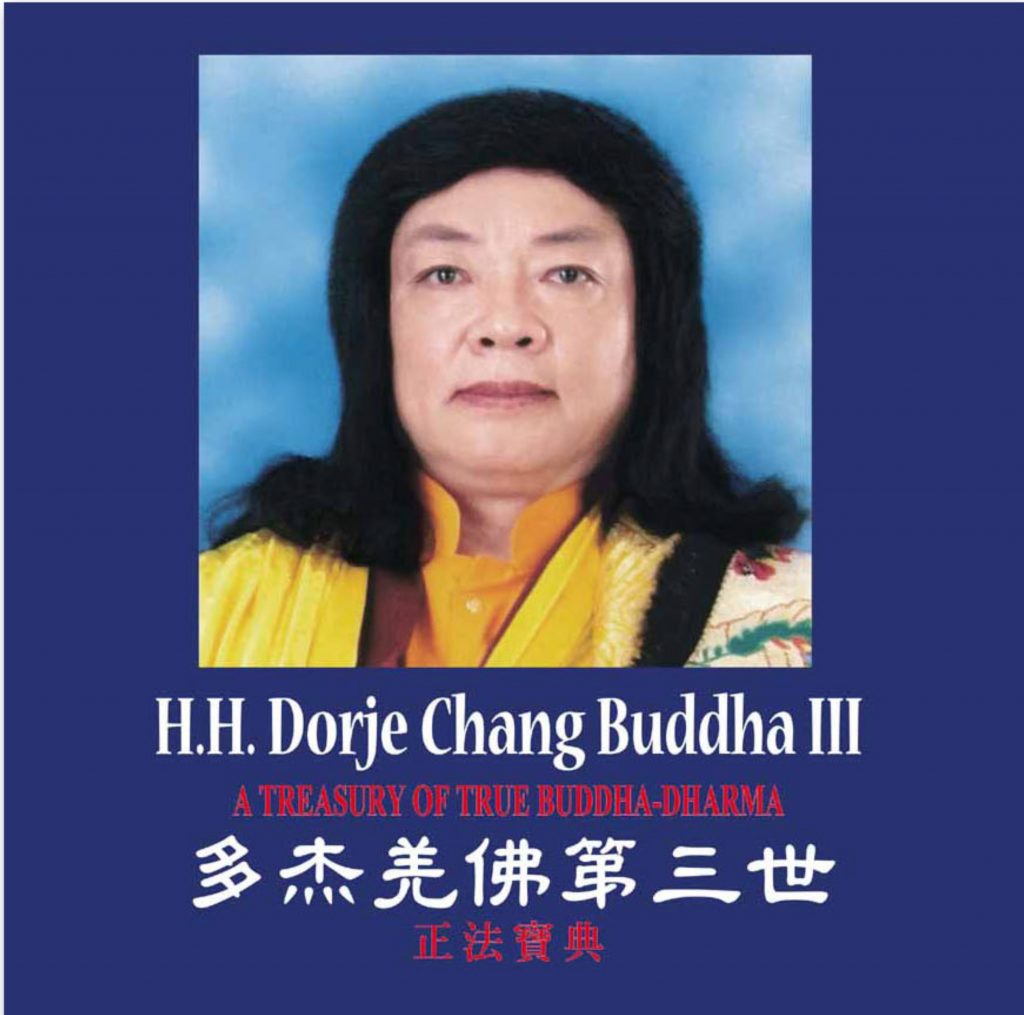